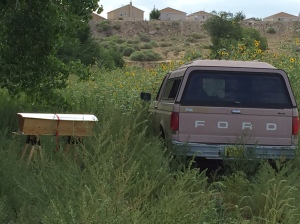 This week I am at a writing workshop in Louisville Kentucky. Since my writing project is about beekeeping, it often brings up bee jokes and bee references.  I was surprised to find a fellow beekeeper amongst our ranks during one of our morning writing exercises. It was a fiction piece, killer bees on the loose, and the triumph of the honeybees, saving the main character’s life. I had to wonder.

I had the chance to talk with Tim at happy hour that night. He talked fondly of his bees and his great affection for them. But he was no longer actively keeping bees. He had realized he was too busy to devote the time needed when they absconded at the end of one season. He was disturbed at the hive left behind in disarray. Likely the colony fell victim to varroa mites.

For every beekeeper, mites are a reality these days. It’s hard to know why or how this scourge exploded on the scene in the early 1990’s. Clearly bees were vulnerable, weakened by harsh practices of the industry, chemicals used in big ag and moving bees around the country for pollination. Varroa brought down even the hardiest stock of honeybees and grown men to their knees as they lost whole bee yards.

Varroa mites are microscopic parasites that infest the brood nest, attaching to the growing larvae and maturing honeybee. If the bee isn’t deformed, dying soon after it  emerges, the mite will eventually suck the living juice out of the bee, making life miserable.

These days bee keepers count “mite loads” with various tests, determining if a colony is heavily infested or if the mite load is something that a healthy hive can keep in check through hygienic practices and a healthy varied diet. Either way, if you bother to google the little beast, it is grotesque in all ways.

As a beekeeper, I am more aware of how important resilient, hardy mite-resistant queens and bee colonies are.  I have already treated my hives with essential oils of wintergreen and tea tree a few times this Autumn—in anticipation of winter.  We’ll see if they survive. This is the real litmus test. If the infestation has diseased the colony and weakened it beyond the point of resilience, you will have a hive of dead bees in the Spring.

At the end of happy hour, Tim shared a heartbreaking story with me. It was the early 90’s. He and his family lived in Southern Ohio. The Ohio State Agricultural Department had identified an AIDS-like disease that infected and killed bees. It came from the varroa mite which now was raging it’s way across the nation. It was decimating the livelihood of thousands of beekeepers who trucked their hives around the country to pollinate crops. The Ag Department mandated that all hives with varroa mites be burned.

Tim remembers that night vividly. His 10 year old son asked to go along. Tim tried to dissuade him, but his son was resolute. And so, they set off to the hives on the side of a rolling hill. Tim with his gasoline in hand and his son by his side. When they arrived, it was dark.  His son looked at him and said, “Dad, they are all in there aren’t they?”  Tim slowly nodded his head, “Yes”.  “So they will all be killed?” he persisted. “Yes son”.  “Dad, the bees didn’t do anything wrong, did they?”.

At this last question, Tim choked up. He took off his glasses and wiped his eyes. “It still gets me, even today”, he said.

These days, we know better.  Along with the bees, bee keepers have learned to live with varroa mites, seeking ways to strengthen their colonies genetically, just as they continue to evolve ways to rid themselves of mites. We are also waking up to the ways we have changed their habitat and climate in such unhealthy ways that they are suffering huge effects.

Now that we know better, I pray we do better by bees. Their struggle to live is our struggle.

close up of the top bar hive entrance

4 thoughts on “When you know better you do better”