These days, bees teach me about some timeless truths.  I thought I knew those truths, but they’ve become neglected and buried in me over the years. Now that I am without a job, having left good work that gave me much meaning and purpose over a decade, there is a decided urge in me to run out and replicate that experience. I want my life to unfold quickly. Pronto. No time to waste. Let me quickly get back in the saddle.

But it’s not to be(e). In times of change and flux, much time elapses between resume′s cast out upon the wind like seeds and creative projects incubating.

Yesterday I checked my bees. Tens of thousands of them, moving slowly, packed in a small hivebox, in the middle of a 64 F degree February day. They were not doing anything particularly spectacular. They were just eating and resting.  They were doing their usual…cleaning, guarding, feeding, gathering, communicating. The daily stuff of the hive. Just trying to stay alive together through the weird ups and downs of the winter weather.

Theses words keep ringing in my head— from The Journals of Father Alexander Schmemann (Crestwood NY; St. Vladimir’s Seminary Press, 1973-1981) 284-85…“Get a job, if possible the simplest one, without creativity (for example as a cashier in a bank). While working, pray and seek inner peace; do not get angry…accept everyone as someone sent to you…pray for them”.

I remember the days I worked full time. Sometime even the simple daily things such as meals were a hurried affair. Often they dropped by the wayside. I wanted to see results. I oriented my life around productivity. It focused me and kept me spinning. Despite my best efforts on the job, the lapsed time between the daily, ordinary things of life in community and the outcome of an idea or a project could seem astronomically slow. Life itself called me to slow down. But ‘Slow’ is not in my nature.

Now it is required. I cannot push the river. It flows with or without me every single day. I can get in and swim awhile. But somedays the best I can do is just stand on the shore and watch the ripples. Or watch bees.

How doth the little busy bee

And gather honey all the day

From every opening flower!

I originally thought that this was a rhetorical ditty.  YES! See how bees improve each shining hour from their compulsive work of nectar gathering. And indeed, they are tireless, often frayed from long hours of fieldwork. But perhaps there is a question beneath this cheerful poetry. After all, how does the bee improve her shining hours..by gathering honey all the day long?

Mark Winston, a bee biologist who wrote Beetime: Lessons from the Hive(Cambridge, MA: Harvard U. Press, 2014) found something remarkably different in his research:

He said that bees in unstressed colonies are restaholics rather than workaholics,—spending up to 2/3 of their lives doing nothing (174) But, when required they can ramp up by compressing the normal time frame of work into a shorter more intense period…There’s an obvious lesson for stressed humans here, which is that rest may have an important relationship to our lifespan and provide resilience to respond to challenges in our personal, professional and community lives.(177)

The key to how bees work is that they do many things during a lifetime, but they do them one at a time. Bees do one thing well for a period in their short lives, then move on to the next chore, accomplishing more efficiently through serial rather than simultaneous work (179) Bees work serially rather than by multitasking, an aspect of labor that provides an effective combination of specialized task performance and the flexibility to allocate the workforce where it’s needed. (177)

We idealize people who multi-task and it makes us somehow feel better about ourselves. But in the end, evidently, Bees may not be intelligent, but they are single minded. Focus expresses the ability to concentrate…resulting in highly efficient and effective work. (180)

Actually, I think bees have a different intelligence than how humans measure it. Intelligence is seen in the hive as a whole, not just one solo bee. Super stars are not useful. Every bee working for the common good is useful.

So, as I live into this relatively unstructured time in my life, with much time for rest and reflection, i will continue to grapple with what it means to be focused. Single minded. I will continue to hear that little ditty singing in my head…“how doth the little bee improve each shining hour…” 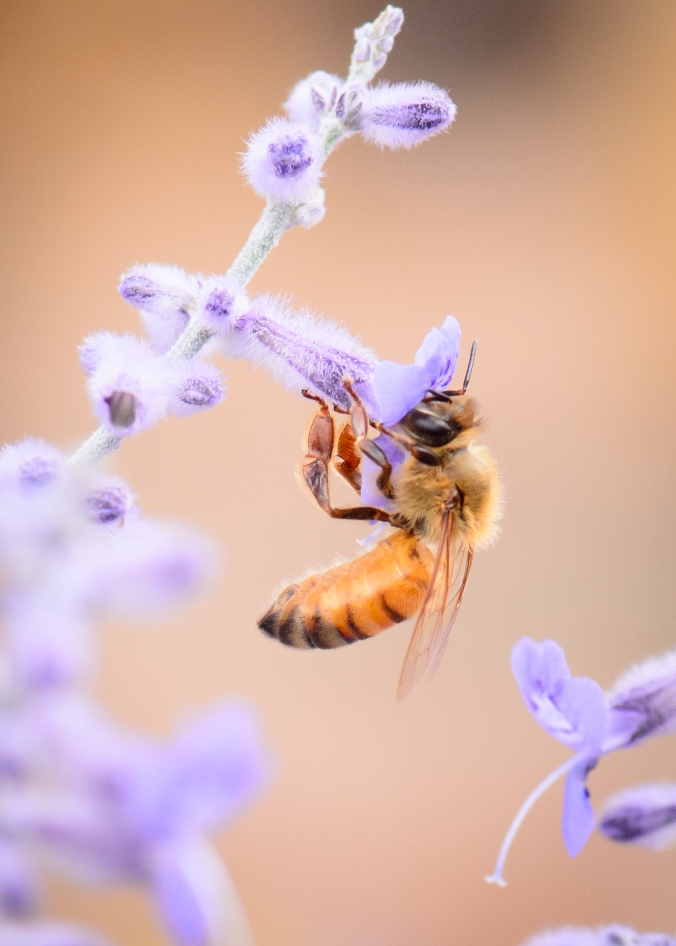