I have a hot hive in my backyard. I know I need to take them far away from town, down to the farm in the valley where there are no people. I like to think of myself as a bee whisperer. They remind me that this is hubris. I am freaked out by their kamikaze ways, torpedoing me when I go out to water the plants. I remind them that they are in my yard by my good graces. Perhaps it is because once upon a time (about a month ago) I went into their hive and took their queen and half the hive mind. They were overpopulated. I needed to start a new colony. No problem. They raised up a new queen. I opened them the other day and am pretty sure I spotted her. But the problem is, this queen might have some Africanized or Russian genetics, which tend to be more aggressive, super productive and hyper vigilant.

So, now whenever I go outside to hang laundry, tend another hive or just play in my garden, this beehive sends a “minder”. They hover, and hover, and pester.

Sometimes they get tangled in my hair, or if they are having a bad hair day themselves, they see my black fleece underwear and it plucks their last nerve. They dive bomb into my pants, thinking perhaps it is the fur of a bear too close to the hive for comfort. I have two pretty angry looking bruises emanating from the red bullseye of a sting.

So, a funny story. We have a security system sign for our house alarm in our front yard that says “PROTECTED BY SECURITY USA”.  Someone recently penned in magic marker next to the “security” part—”bees”. So now it says, “PROTECTED BY BEES SECURITY USA”. Very funny. I hope they didn’t get stung by a bee from the little terrorist hive in our backyard, radiating minders into the front yard. We haven’t seen angry notes yet, or been sued. My neighbors are amazingly supportive.

So, until I take them away and deal with the “hot” queen, it has given me plenty of food for thought.

I have a rather “hot” Leo the Lion personality —having been born under this sun sign in the fair month of August. Not many days go by that I’m not enraged by something in the news. My urge is to pour all my enthusiastic, persuasive, righteous, fire-y energy into that issue.

Not a good idea.

As two friends have reminded me in the last week alone…it is better to pour that persistence, enthusiasm, passion, that hyper-vigilance, that raging against the “machine” into creative energy for building a new tomorrow on this planet. All the life affirming things I love are awaiting my attention. My daily work in progress is to become more filled up with Love than rage, day by day.

My spiritual director, Cynthia, a wise soul who is further ahead on the path, reminded me that we are all governed by the gravitational pulls of the planets, the lunar cycles, the seasons, though we have run far afield of them in our relentless pursuing and fixation on culture, politics, words, techno toys and screens. The farmers have always known we are indivisible from our planet—thus the Farmer’s Almanac with instructions about weather and when to plant according to the moon.

She told me about her recent visit to the Monterey Aquarium in Northern California. There she was fascinated to learn about octopuses. From Sy Montgomery:

The common octopus has about 130 million neurons in its brain. A human has 100 billion. But this is where things get weird. Three-fifths of an octopus’s neurons are not in the brain; they’re in its arms.

“It is as if each arm has a mind of its own,” says Peter Godfrey-Smith, a diver, professor of philosophy at the Graduate Center of the City University of New York…researchers who cut off an octopus’s arm (which the octopus can regrow) discovered that not only does the arm crawl away on its own, but if the arm meets a food item, it seizes it — and tries to pass it to where the mouth would be if the arm were still connected to its body.”

We have forgotten we are bodies—more alike all the creatures than not. They have evolved brilliant ways of adapting to and living on earth that we as a fairly young species—the last to be exact— could really benefit from in this time when our survival is so interconnected. My bees, and particularly the hive mind, draw me back to remember this on a regular basis. I am in relationship with them. They are showing me lessons, some simple and practical, some existential and profound, on a daily level. They remind me of the world in which I live in so many ways….teaching me how to navigate it.

For instance, the gentle “herding” instinct to keep me away from their hive, the daily persistent, needling, buzzing presence—with the occasional stings— remind me to stay awake, stay away and be respectful. It is also a model of how to show up in the world when my things or those of all that I love are threatened. Persist. Resist. Sometimes with a sting, but mostly just with vigilant “hovering”.

And so, on this day, instead of manipulating my universe, I slow down and listen up. I reflect on the body wisdom of the created universe. What is it telling me these days? It would be wiser for us to remember that we are part of a much large universal story that is unfolding, of which we are only a minute part in this dot of a time in her/history. There are successful ways of living that Indigenous people can show us as our western industrial civilization is coming up short.

It is time for us to set our clocks with the wisdom of the elders. The earth speaks, and since we are part of the earth, our bodies deeply intertwined, it would behoove us to slow down and pay attention. 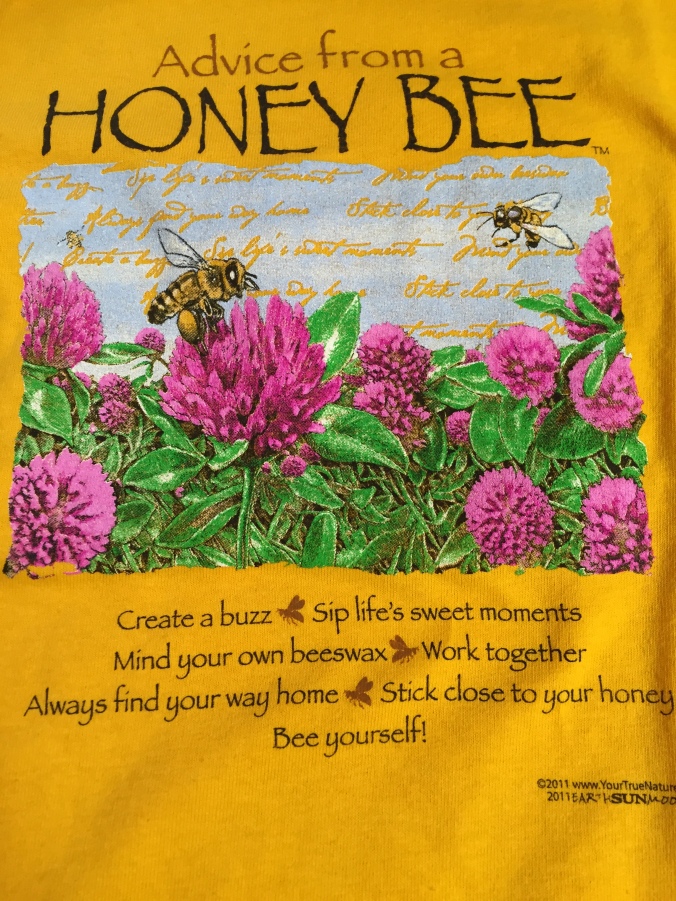