You nurture a hive through the winter, tending it like a baby. Then one day, due to such good care, the queen begins laying and laying and laying and laying…she lays so many eggs, evidently up to 2000 eggs a day, that soon the hive is packed with fuzzy little bee babies rolling around everywhere. The home begins to feel like Thanksgiving in a 600 square foot house with friends and family flooding in for the festivities. They then stay overnight, sleeping on floors and in corners and 3 to a bed. 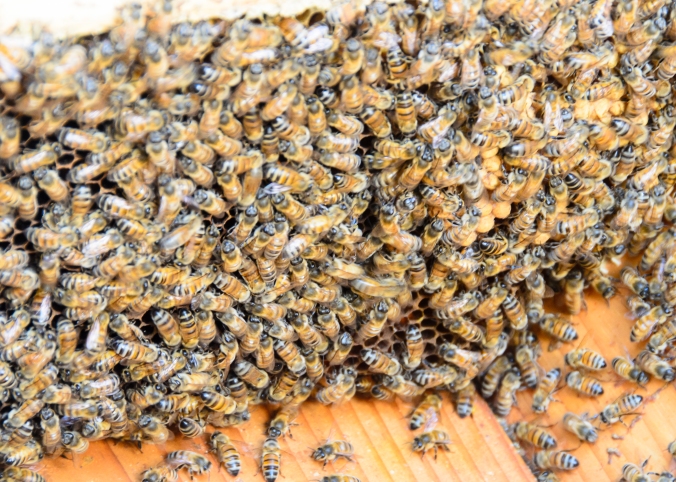 With the weather turning warm, the girls get a wild hare. “Hey, why don’t we take half the household and go find a new place to live? Someplace that has more room and not so many bodies in the kitchen at one time?”  They plot and they plan, and before you, as the bewildered beehive keeper even notice—since you are still joyfully and quite blindly fawning over their multitudes, burgeoning exponentially since the meager winter—half the hive is suddenly gone.

So, this has happened to me twice already this year. I’m glad to give my bees away to good homes. Which is what happened to the hive in the North Valley, kindly hosted by my friends. When my bees split I was totally unaware. Annette texted about a mysterious swarm dangling in their fruit tree…only to disappear. A day later, it showed high up in their Cottonwood. Stephen called me this time and I told him to prepare the ladder and a saw. By the time I rushed down there they had absconded again….only to appear yet one more time in the very same fruit tree they had originally left 3 days before. This time we caught them. Gentle and disoriented, they clung to each other in a sweet little oblong shape. Stephen sawed off the branch and we hived those beauties in the hive where my friends had lost a a whole colony just that winter. They had also disappeared. Not unusual in the bee world today. Lots of confusing weather patterns, mites, radio waves… 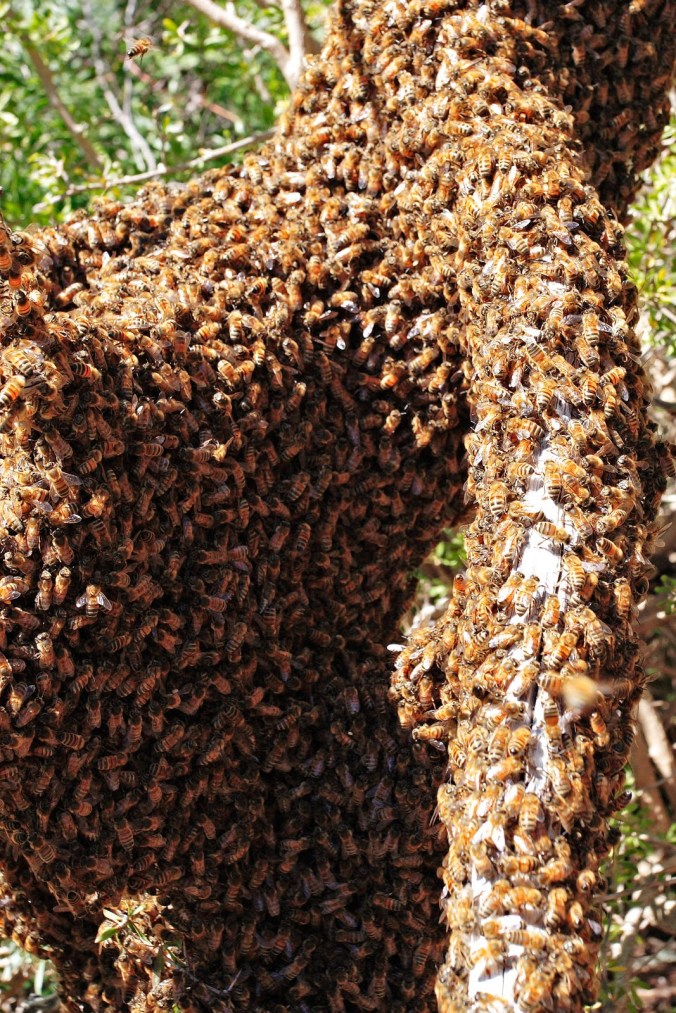 Fortunately that swarm had a happy ending.

The last hive that swarmed on me hung out for a while on my neighbor’s lilac bush. When Phyllis saw it, she was worried. I received three panicked texts in a row. I admit, they do look intimidating to the average neighbor. All those bees clinging together, hanging like a basket in a tree. She wondered if they might take out after her watering her roses….or make a new home in her house. I assured her that the first worry was not so worrisome. Bees in a swarm state are generally gentle as lambs. The second worry was what sent me over to her yard as the twilight deepened that very night— scooping them into a hive to seal them off til morning. I would hate to be the cause of bees under the eaves.

The next morning I carted them off to the organic farm in the valley. It was a place that I would like to live if I were a bee—the flowering arugula is to die for. But they were unhappy with my choice of homes. That night, as the wind howled and rain began to pelt, the bees chose to dangle outside the home I had assigned. I raced down to the farm, exchanging texts with the farm owner. As the black night whipped around me and strange dogs snarled and barked, running along the fence row on the other side, I approached the hive. My bees were swarming …again. I plopped the bees in yet a different hive. The next morning they were gone. My sweet baby bees. Absconded. They had a mind of their own.

No need to shed too many tears. I had done my best. Now they were on their own.

Kinda like children. You do what you can. One day they will decide to head out into the storms of life after you’ve done all you could to shelter, love, nurture and protect them. What can you do?

I trust you have everything you need.